What Happens When You Go To Court For A Speeding...

by Robert Keith 3 years ago6 months ago
109views
2

In this article, we’ll be discussing the legal process used in many traffic courts. Procedures may vary according to the type of violation, location, and individual characteristics of the driver like age and driving record. To find out more about the traffic proceedings in your local court, speak to a traffic attorney in your area. 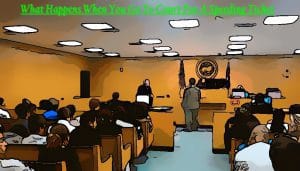 The First Day In Court (Arraignment)

Most citations have details about the date and where you must go to court. The initial court date is referred to as arraignment, and it’s best to get to court early so that you have sufficient time in figuring out which courtroom you must go to. Once the courtroom is open and everybody is inside, the bailiff or clerk may explain the particulars of the proceedings in the courtroom. The judge will take the bench and proceed with calling each case from a list. The list is usually alphabetically arranged according to the last names. Once your case is called, you will then approach the podium in front of the judge and will be asked to state your plea. You typically have two plea options:

If your plan is to admit guilt, then why go through the trouble of appearing in court when you can pay the ticket via mail or email? In most states, however, traffic judges can reduce fines, and without going to court, this will not happen. While waiting for the case to appear, pay attention to how the judge rule in other cases. If the judge has already lowered fines for various people who pleaded guilty before you, then the likelihood of him reducing yours may be good. You can view it here if you want to know what to say in court for a speeding ticket. If the judge doesn’t appear to give anyone slack, then your chances are not very good. Contingent on your driving record and the state where you reside, another option is traffic school. Some states necessitate drivers who wish to do traffic school to admit guilt for the violation, after which a citation fee fine is paid. Once the driver completes driving school, the court will dismiss the violation from his driver’s record, permitting him to prevent incurring points on his driver’s license.

Pleading not guilty is typically equal to requesting a traffic court trial. Once you enter the please, the judge will set a date for trial, and the officer who gave you the traffic ticket will be subpoenaed to appear in court on that date. If the officer pulls a no-show, it generally means that you’ve won the case. If the officer shows up and you choose not to do a trial, you’ll probably be allowed to change your plea to guilty. However, most judges are less willing to reduce a fine or permit you to do traffic school than they would have been if you’ve pleaded guilty at arraignment. A judge can necessitate you to post bail once you plead guilty at arraignment. Bail is usually not more than the fine you received for your ticket, and some people go to companies that offer Bail Bonds San Diego way to help them with the funds. If you go to trial and win, the court will refund the bail, but if you lose, the money will be used for paying your fine.

2
Robert Keith is a CEO and Author of one of the Top Leading Website Viraldigimedia.com. I fond to write on Tech, Lifestyle, Business, Entertainment, Health etc.